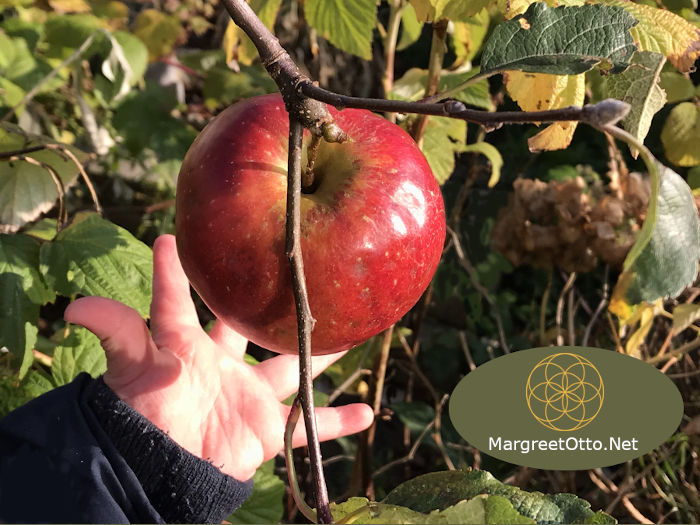 (Artikel wordt nog in het Nederlands vertaald). Around the 21th of October, halfway the meteorological autumn in the Northern Hemisphere, most fruit on the trees have been harvested, as, depending on the weather, early night frost might set in. Depicted here is the hand of my grandson, who has picked a few apples of my apple tree!

This was actually a dream come true. For fun I had planted my first ever fruit tree on new year’s day of 2019, which appeared to be a pear tree, and two apple trees that same week. For early winter the temperature was still very mild, the sun was shining happily, and the weather forcast didn’t predict snow nor freezing temperatures, so I could actually do it.

While planting them, I envisioned my grandson harvesting fruit from these trees, probably within a few years when the trees would have grown tall. I was secretly hoping though that the trees would at least produce a few small fruits next summer, and with lots of luck this summer, but I actually didn’t expect that to happen, as the trees were still young. (I’ll place a picture of them just planted, later in this article). I felt regret, and thought of this Chinese proverb which states:

“The best time to plant a tree is 20 years ago,

the second best time to plant a tree is NOW!”

I felt so stupid, why didn’t I plant these trees way earlier? Well I have a few explanations for that, but anyhow, this was the situation.
And for whatever reason, one of the trees must have felt my wish, or was able to magically produce a few glossy big appels which grew increadibly red and sweet!

People mentioned they looked like Snow-white’s apples, indeed I thought this myself, but there’s no poison in these (except for the seeds which are toxic and aren’t edible), as my yard is fully organic and dynamically grown, with a bit of natural compost. (no pesticides nor artificial fertilizer). Also I figured, in a paradise like situation on our planet, Adam and Eve would certainly have picked them too.

Anyhow, as this website is still a work in progress, I would love to mention that if there’ll be a society founded to establish a hectare grid on Earth, I would love the foundation to host a database of original* native fruittrees, nut trees, berry bushes and evergreen trees, for all 4 climate zones! (*original, no cultivars).

People who would want to settle on kin domains can go to such a database, in order to get information on how to propagate and grow trees succesfully. Oh and yeah, probably herbs, vegetables and flowers too.

Wouldn’t it be nice to have this being established by the common people? These could be individuals and/or organisations which have practical experience and knowledge about everything involved. And it can be approached from different diciplines too. Such as contributions from artists, photographers, writers, etcetera.

I know, it’s a bit ambitious and I can’t do this all by myself (lol), but I’m putting the wish here, just in case there would be more people out there who also might want such a thing to happen!