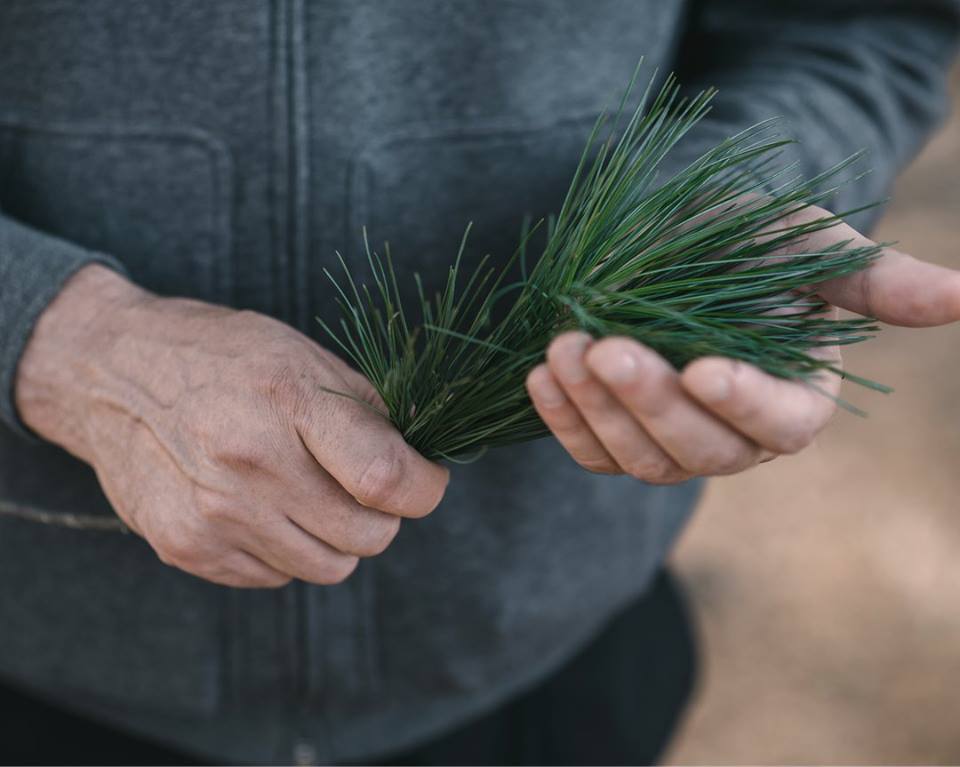 Part 3. The leaves of Conifers can be either shaped ‘wide and flat’, in the sense of a sheet of paper (with a broad or wide surface), or oblong (which in size can be either small or long). The latter can be compared with the shape of a young blade of grass, seen as an oblong object. We can call these leaves also short or long leaves depending on the treespecies.

Thus the short & long leaves of Conifers have an average in diameter of 0.04 inches to 0.11 inches (1 mm to 3 mm). The length of this type of foliage varies from approximately 0.6 inches to 6 inches (1½ cm to 15 cm). On that scale, and for the purpose of this article, the variety in lengths can be differentiated as ‘short’, ‘medium’ or ‘long’. The longleaf version is shown on the picture with this article. (Picture: Ringing Cedars Russia). This is the end of a branch of the Siberian Pine. In Latin this Conifer is named ‘Pinus Siberica’.

The ‘sheet type’ leaves with a wide surface are seen with most Cypress Conifers. But with all varieties of Conifer leaves, we could give them the common name of either ‘Conifer leaf’ or just ‘leaf’. The latter is also used for deciduous trees. The mutual differences of the leaf shapes of Conifers however, are specified separately in this article for each Conifer type.

Phyto green
All varieties of the oblong leaves, either small or long foliage, form the green coverage of the branches and sometimes trunk, which in a sense you could also view as the ‘coating’ or ‘the fur’ of the tree. The description of this leaf type with ‘needle’ is in fact not entirely correct. The leaf of the Conifer is ‘phyto’, so from plant matter. Phyto stems from the Greek words ‘phyein’ (to bring forth, make grow, that which has grown) and ‘phut(ón)’ (derived from plant matter).

Photosynthesis
But first lets have a litte bit of insight of what makes the ‘phyto’ plant material. As most of us know, this is due to the chlorophyll in the leaf, which forms the green color. This substance absorbs sunlight (as microscopically small solar cells), and is therefore an energy supplier for the process of photosynthesis. In this, carbon dioxide (CO2) from the air, and water from the soil and air, serve as a supply stream for conversion to oxygen, carbohydrates (sugar) and other phytonutrients for the tree itself and the environment. Due to this process, oxygen is released to the atmosphere, together with other etherical components such as the fragrant resin odor.

Conifer leaf
Most leaves of small & longleaf pines and cedars have a bit of a woody, firm hay-like texture, but the long leaves for example are more flexible as they can slightly bend.

Conifers with wide or broad fanning leaves, are seen with all Cypress species in the Cypress family. These are usually soft in texture and very bendable. Both types of leaves are Conifer leaves.

Translation
In Dutch language, we often use the word ‘small’ for oblong, and it is also pronounced the same, but written with one ‘l’ less: ‘smal’. But the meaning of the word is slightly different. Most often we use the word to describe an object or shape which is thin and tall or oblong, but has a small width. Hence the object isn’t wide or broad. A young blade of grass or a straw would be a good example for this. But if we would describe an object as being ‘small’ compared to the opposit ‘big’, we would use the word ‘little’, which is ‘klein’ in Dutch. It was quite a puzzle to come up with a good description for all the different leaves, in the slightly altered way of categorizing them, that is.

Small-leaf and Long-leaf
Another language thing, in some cases we write word combinations together in one word. Let’s say if in Dutch language we would want to describe a Pine leaf as a ‘small leaf’ that would be possible. It would then alter in ‘smalleaf’, hence also with on ‘l’ less! In English it could supposedly be written with or without a hyphen in between, such as small-leaf or just small leaf. And the same is for long-leaf, long leaf or longleaf.

So you might sometimes find different wordcombinations in these articles, for it is just a personal preference, although many different terminologies are used nowadays when it comes to determination. Noted aside, when translating articles from Dutch to English, these are absolutely factors to consider.

Best of both
Please take into account that Dutch people often learn a 2nd language at school, and the higher educated a third or fourth, as we are a very small country, being surrounded by larger countries, all with completely different foreign languages (English, German, Belgium, French). However, in most cases one loses the skill of writing and speaking these languages in adulthood when they are not practised in daily life.

But nowadays due to the internet, it seems languages are more fusing together than before. In the Netherlands especially, English is most heard on tv and internet and in music. It is the 2nd language for many, but not all Dutch people speak or write English, and many just a little bit. And when it comes to writing articles, one has to continuously look up new words in the dictionary, both for spelling and meaning, the latter especially when an unknown professional jargon is being explored. It makes it even more confusing when similar sounding words in two different languages, can have a different meaning, sometimes even opposite!

Foliage
It is also possible to use the word small-foliage for small-leaf. In a sense, foliage is the indication of all leaves together (of one particular tree, shrub, bush or plant). The foliage of Conifers with oblong leaves grow either individually attached to the brances, as with Spruce and Fir trees, or in clusters as with the longleaf Pines, such as the Siberian Pine, or the small leaves such as from the centuries old Libanon Cedars. The foliage of the latter grow clusterd in star shapes. For all varieties of oblong Pine leaves, there are several types of clusters, namely pairs of two, three or five.

Good ornamental
The long-leaves of the white Pine group grow on the branches in bundles of five. This results visually in an elongated mass, which, partly due to their length and weight, caused by their dense growth together, are draped slightly bent in an arc from the branch. To express it into a somewhat more poetic description: it creates a ‘good ornamental’ for the tree, an overall impression of an elegantly lush, richly endowed green foliage.

One more language thing, in Dutch the word for ‘leaf’ is ‘blad’. And another Dutch word for ‘blad’ is ‘loof”, which is ‘foliage’. But ‘loof’ has a double interpretation as it can also stand for ‘praise’, in the sense of admiration and respect, or to applaud something. The Dutch verb says: ‘Ik loof, wij loven’ (I praise, we praise). Therefore, we could say: ‘Loof het Loof’, which would then say ‘Praise the Foliage’. You can’t make this stuff up really. Anyway, just for fun!

Size, structure and texture
The structure and texture of the Conifer leaf can vary per family and species. Some small-leaves are only 0.6 inches short (1.5 cm), with a thickness of 0.07 inches (2 mm), firm and round or square-like in structure (can be rolled through fingers), are sharply pointed and grow from woody projections on the branch, which gives it a ‘rough’ look and feel once the leaves have fallen off. (Spruce).

Other leaves are medium sized (4 inches) or long (6 inches), sometimes more flexible, softer and flattened, can therefore not be rolled between the fingers, with a rounding at the end of the leaves which grow from a smooth bark (Fir). The taller leaves grow also from smooth bark (Pine).

From the type of leaf, the cone shape and the manner of growth of the cones on the branches, and the type of bark, one usually recognizes the family to which the Conifer belongs.

But this requires an extensive study (because there are around 600+ species) which is not the aim of this range of articles. The goal is truly a first introduction, oriëntation and valuation, and has no official educational character. If one wants to derive some decision-making from this, research for yourself and preserve the good!

Wide leaf (wide & flat sheet shape)
Conifers from the Cypress family have wide broadly spread leaves. The Cypress ‘Thuja’, for example, has a flat fanning leaf with large notches. It grows the length of the entire branch, and is thick and soft, is bendable and has a flexible texture. It distinguishes this Conifer from all other Conifers with oblong leaves (either small or long), but also from most deciduous trees, which usually have the sheet or blade type of leaves, such as Oak, Birch, Ash, Fruit- and Nut trees. In general, the size and texture of the leaves of deciduous trees, differ from those of the Conifer trees, both the oblong varieties and the wide sheet type versions.

Conifer foliage
To distinguish even further, since the Cypresses belong to the Conifers taxonomically, we can also describe its Conifer foliage more specific, e.g. as ‘Thuja leaf’ or ‘Thuja foliage’. Foliage would probably sound as a better description for the soft and elegant appearance of this type of leaf. But, ‘foliage’ can be used for all leaf types, both for the leaves of deciduous and coniferous trees, for the latter also including the small-leaf and long-leaf versions.

Therefore, one should call it according to ones own preferences, and often to name the tree is in most cases probably the best, or referring back to its Latin name. On the other hand, it would be preferable if there would be one international determination for all Conifers, instead of so many different names in different languages.

For the next or previous part in these series:
CONIFERS 1 – INTRODUCTION
CONIFERS 2 – FUNCTION AND PURPOSE
CONIFERS 3 – LEAF AND FOLIAGE
Next part:
CONIFERS 4 – CONES AND STROBILI
CONIFERS 5 – FAMILIES
CONIFERS 6 – GROWING
CONIFERS 7 – GERMINATION SEEDS