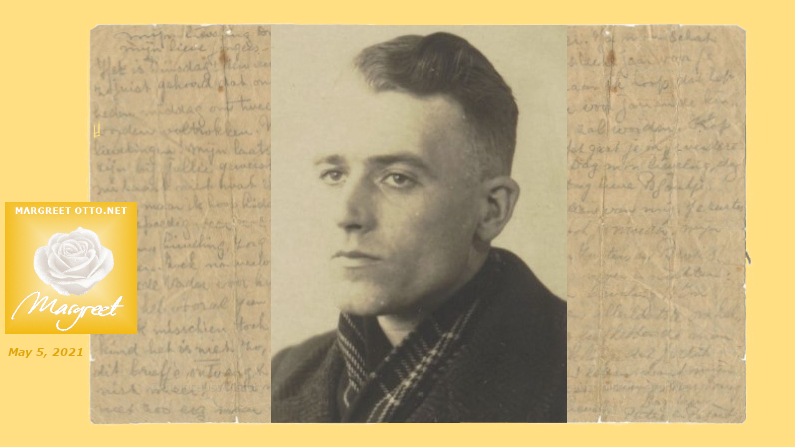 Today the 5th of May was Liberation Day in The Netherlands. And yesterday I watched television with my mother at Remembrance Day on the Dam Square in Amsterdam. We had done the same the previous year, and both times it was a virtually empty Dam because of the alleged pandemic that is rife worldwide. Hence it gave a strange feeling, because many of us in The Netherlands don’t feel that free anymore, compared to, let’s say, just over a year ago.

Yet again, it was a special event, registered with beautiful camera footage, with an overview of part of the center around the Dam, filmed from a high point. And even a rainbow broke through the dark clouds and gave its edges a beautiful multiple coloured ‘silver-lining’. Had never seen it before this way! It felt as special, almost as a sign from above, as far as I am concerned: for the whole of the Netherlands, and perhaps even for the whole world…

However, for my mother and me it was doubly special, because we remember her father and my grandfather in particular. Sadly neither of us have known him.

A few days before, on April 29th, my mother had found his photo and farewell letter on the internet. This was already special itself, because that is also his birthday. And so we discovered that even though it is 80 years later, the loss is still there. Especially for my mother (and her brother). Because well, on December 29th, 1942, their father was executed in the Veluwe (a national park), after he had been in prison in Scheveningen for a year. Because he was in the resistance. And the farewell letter he was allowed to write that day for his wife and children, well it is truly heartbreaking!

And so I discovered for the first time today that this prison where he was located is called the ‘Oranjehotel’. Because that’s what it was called at the time, although it was far from being a hotel. You can read more about this here:  https://www.oranjehotel.org/en

What is special to me, is that I dreamed about him 10 to 15 years ago. He appeared in my dream, I didn’t recognize him (because I have not known him), but I knew he was my grandfather. And he showed me how he was persecuted. About five or seven men stood side by side against a wall. And opposite them was just as many soldiers, so it was one on one. I saw the scenery from behind the soldiers, so I looked at the wall. And when the command was issued, all the soldiers fired at the same time, and I saw the men collapse in front of the wall. After that, my grandfather said that he had not been scared at all, and that it was over very quickly.

What I find special is that I can deduce from his farewell letter, which I only saw for the first time last week, that he was indeed not afraid! He was more concerned about my grandmother and his children, than he was about himself. However, you can see his sad look from the photo.
I can imagine though that he was not afraid. Because perhaps he was even relieved at his forced surrender to the inescapable, after a year of imprisonment in horrible conditions. And also: for nothing! He had done nothing but defend his freedom and that of his loved ones.

After he was shot, the letter was delivered to my grandmother along with his bloody clothing. What a drama. And what a mentality to hand it over to her like that. And to shoot people like that in cold blood. How would those soldiers feel who simply obeyed orders? Did they feel just a little bit of conscience? Did they realize that they were not only taking the life of my grandfather -then 28 years old-, but also the father of his children, and the husband of his wife, and the grandfather of his four grandchildren? Probably not. But it has such a long term impact.

At the bottom of this article the (now yellowed) letter (front and back), and directly below the letter typed in text. Reading that over, I thought, he was murdered 80 years ago, but in fact freed as well. Freed from imprisonment which was a spiritual torture. And who knows, maybe his execution at the time went pretty much as in my dream. Dreams are false, but still!! And perhaps my grandmother joined him many years later when her time had come too. That is why I am posting this article on Liberation Day.
Free at last!

Tuesday 12/29/’42
My darling
my dear guys (children),
It is Tuesday ± ten o’clock and I
just heard our verdict will be carried
out this afternoon at two o’clock.
My dearest darlings! My final thoughts
are with you.
I almost don’t know what to write,
but I hope Lida, that you
will overcome this major setback soon.
Darling, take good care of the children.
Search over time a good father for them.
Say, Lida, make sure to not have false hope
that I still may be alive, because
child (darling), that is not true, though!
When you receive this note, I’m no longer there!
For me this is not so bad but for you

(other side of letter)

it is worse. Yes my darling
1942 has been a bad year for you,
but I hope the new year will be better
for you and the children. (Gerard wrote this on the 29th of December, 2 days prior to the new year)
Be strong! Do well in the rest of your life.
Bye my darling, bye dear Patie, bye dear Bjoukje.
Lida greet all of mine. Your sisters and brothers
and also your mother, my mother,
my Sisters and Brothers,
All brothers-in-law and cousins.
Lida my darling!! In my thoughts I give you
a very last hug, from your loving husband Gerard.
I hope you will be able to read this,
for myhand trembles a little.
Now byebye Lida, bye sweetheart,
bye dear Patie and Bjoukje 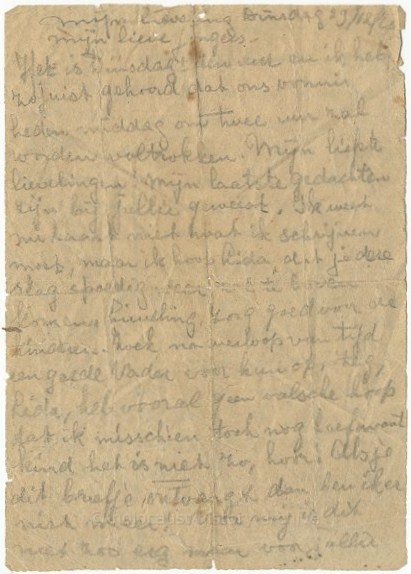 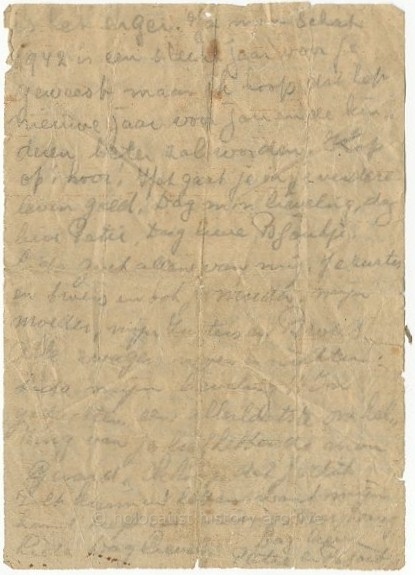