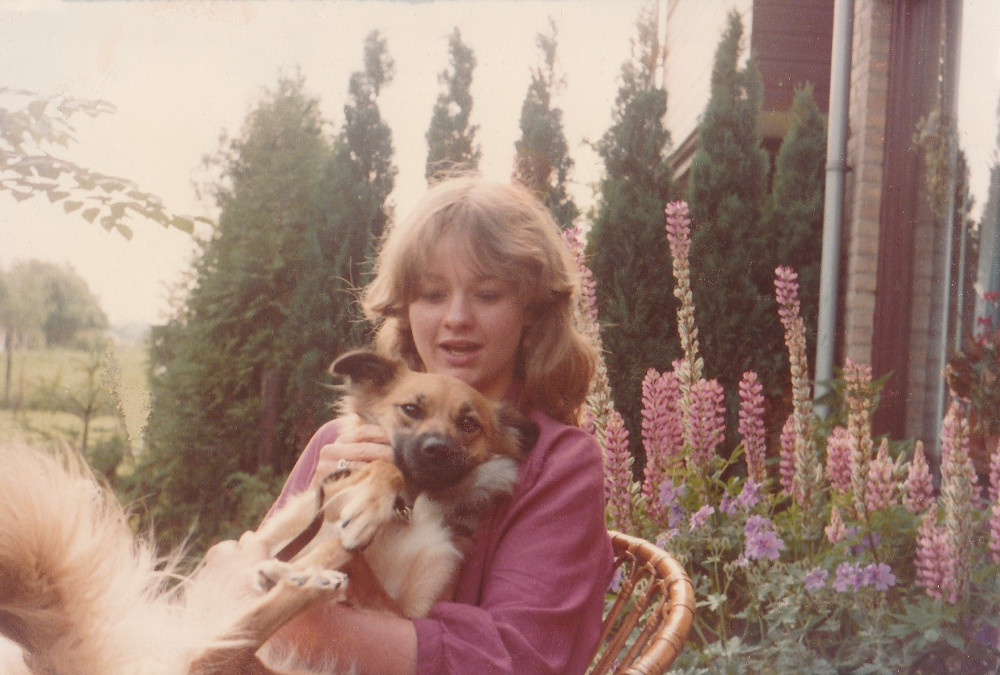 Once we had two cats. They were named by us, but I can no longer recall who named which cat, as these are memories of my childhood. Anyhow, the cats were very different from each other, like day and night. And their names didn’t match that much either. But they could get along very well.

The very sweet and quiet cat was named ‘Suusje’, which resembles a sweet female name with a bit of endearing excitement. And it suited her so well! She was a slender orange cat with almost a fluorecent hue, marbled with a few whitish stripes, if I remember well. And indeed she was very sweet, sometimes even boring. But we loved her! And she loved to sit on our laps purring.

The other cat was more firm, and black and white, named ‘Hoogheid’, which means Royal Highness. He had a somewhat fierce, sometimes penetrating look, but was also young and playful and energetic. He certainly had everything of a royal attitude. There were some Siamese genes in him. Well then you know it.

Sometimes we forgot Hoogheid had a bit of an unusual name, and often, when we would call the cat inside for the night with ‘Royal Highness!’ through the open kitchen window, passers-by looked at us dumbfounded. Ofcourse it quite often appeared the cat wouldn’t listen to us at all, and we had to repeat the calling quite often.

I also remember he was once gone for half a year, and we thought we had already lost him, went through the mourning process and such, while one day all of a sudden, I heard him meowing from a distance while running towards me. We were so increadibly happy to have him back!

I can still remember the feeling of sheer happiness when I first saw him. I almost could not believe it. And he appeared to be as thrilled as us to be back home. And only he knows what adventures he went through ofcourse.

But we had so many happy moments with these cats, as a small family, me and my mum and my eldest brother. I remember one evening at the ‘Sinterklaas’ celebration, where both cats jumped a meter high in the air because my brother got an electric toy train, which he could operate with a remote control. The sight of their giant jumps was so funny, that we laughed the entire evening!

Yeah, that’s all gone now, but it reminds me how important pets can be in the lives of humans, and how they really color and shape our lives with us! This also reminds me of a dog we had, named ‘Sarah’, a headstrong colly, who would let you call her for hours without blinking an eye, or even giving a hint of letting you know that she knew you were waiting there.

Then finally, after she was tired chasing the grazing cows and sheeps for hours, would come back home, but her innocent eyes and good looks would cause you to immediately forgive her.

We had more pets through our lifetime, including at a younger age, my grandmothers beautiful German sheperd dog with the appropriate name ‘Caesar’, who once picked up my brother as a baby by his diapers in a park, when he would crawl too far out of sight. The dog wasn’t trained to do so, it was just his instinct and love towards us. We were all utterly amazed. Never forgot that moment too.

My brother and I would also feed him secretly our breakfast porridge (which both of us didn’t like that much), from our spoons held under the table basically, when our mother wasn’t watching.

Unfortunatedly, when I grew older my allergies for pets became worse, and I can’t tolerate them for days around me, because it’ll make me astmatic with itchy eyes. I really hate that because I love animals.

But I have come to an acceptance of it. It is more easy now because I live in a neighbourhood where there aren’t lots of parks to let them run freely, and there’s a lot of dog- and cat poop in these parks nowadays, and sometimes also on the sidewalks.

By the way, if I would have my free plot of land, I would certainly have a few cats and dogs in a room outside my living room (so the allergy components wouldn’t pile up where I would reside most).

At least my pets would be able to run freely on my homestead, without me worrying for them to be run over by a car or something, and without having to walk with them on a leash 3 or 4 times a day, which can be quite a hassle if you have no time, when you’re out of town, or when the weather is bad for days on end.

That’s the other side of all the glossy advertisements for lovely and cute pets in cosy living rooms, where the entire family lives happily and healthy together, while serving their pets cat & dog food from tins and carton boxes or plastic bags, derived from poultry meat, cows and fish. I’ve found it a bit strange at times, as cats and dogs wouldn’t be able to catch a cow themselves, nor fish, but I know, they aren’t born vegetarian either.

Anyhow, this is what I wanted to write today! And it is ‘World Animal Day’ today, I’m only realizing now!