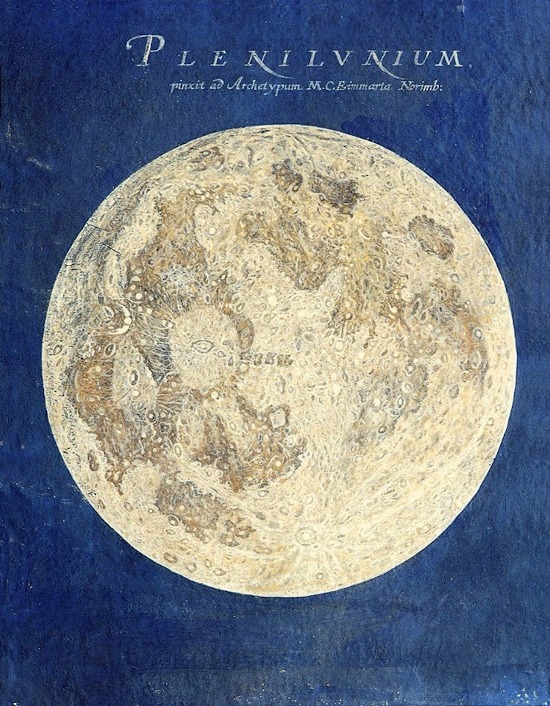 Do you love the sight of a full moon, and its mesmerizing radiance in a starry night sky? Then you probably also like this painting. It was made by Maria Clara Eimmarta (1676-1707), who was a German astronomer and designer.

She engraved this painting with the help of data derived from telescopes in her father’s observatory, analysed by both herself and fellow astronomers. Its Latin title is: ‘Plenilunium Pinxit ad Archetypum’, which means ‘Full Moon Painted as Archetype’.

Sea
And how beautifully she depicted the moon’s structures and craters! As I was pondering on those, I travelled a bit in my imagination to the times of yore. Back then people thought these vast dark spots on the moon were actually oceans (which they might have been at some point). Thus they actually called such lunar crater a ‘Maere’, which is the old English word for Lake. It stems from the Latin (and Spanish) word ‘Mar’, which in these languages means ‘Sea’ or ‘Ocean’.

Mare
In Duch language, Maere is spelled as ‘Mare’. As English readers read this word  however, they will tell us that’s a horse, and the female version of it. But in Dutch language, Maere is written as ‘Mare’, and has the meaning of lake, as well as ‘Tiding’ or ‘a Message that buzzes around’.

And while contemplating on this Dutch word ‘Mare’, I found it a bit confusing, as apart from its meaning in other languages such as ‘Horse’, ‘Lake’, ‘Sea’ (German), ‘Tiding’ and ‘Message’, it can also be written as ‘Meer’ (with the meaning of  Lake in Dutch), which can be compared to ‘Mere’ (with the meaning of Lake in Old English)

And… it also means ‘Lunar Crater’ in Dutch. Added tot his, there are also other meanings of ‘Mare’ referring to the Dutch word ‘Maar’ (which means ‘But’ in English), but these have a different etymological origin and are not related to this article.

Now, I’m not sure what you think of this, but it was mind boggling to me. I had to at least edit this artile a hundred times in order to get the information in the right following order, while having new insights every time.

Pronounciation
But that’s not all there’s to it. For all of these Dutch meanings of the word ‘Mare’, it is pronounced differently at the vowels ‘a’ and ‘e’. There is no English word to my knowledge that produces a comparable sound. Probably it’s phonetically closer to the Latin version? It is also interesting though to see how the word ‘Mare’ that stems from this, is used in other languages, also in old writings.

Mare Liberum
For example, the Latin ‘Mare Nostrum’ (mar’ e nos’ trum), means ‘Our Sea’. And the ‘Mare Liberum’ (mar’ e lib’ er um), stands for ‘Free Ocean’. The latter is the title of a 17th century manuscript published in 1609 by Hugo de Groot, commissioned by the Dutch ‘United East India Shipping Company’ (V.O.C. 1604-1606). In this he argues for ‘A free passage of all seas, the right for all peoples’.

And it’s interesting to mention, as it formed the base of international law for the principle of ‘Free access, travel and trade to all oceans for all countries.’ To this day, this law is still used for international waters, that is, the oceans and seas outside the territorial waters.

Lake
The word ‘Mare’ has also been used for ‘Lake’ in other languages. And quite often it seems to be interchangeable with the word ‘Sea’. Compare the German ‘Meer’ (which means Sea), and the German ‘See’ (which means Lake), versus the Dutch ‘Meer’ (Lake) and the Dutch ‘Zee’ (Sea).

In French it is ‘Mer’ (Sea), and as stated before, in Old & Middle English ‘Mere’ also occurs in the meaning of Lake. This usually concerns a shallow water, surrounded by landmass. A ‘Mare’ can therefore also be a mountain lake.

Crater
More in particular, once the fire of a fire-breathing volcano is finally extinguished, and the Earth’s heat diminished, the process of cooling down sucks the topsoil inward -just like a bubbling plum pudding when taken off the heat- while the lava solidifies and a crater is formed. As such, a hollow basin, it collects water by rain, and a lake fills in. Interestingly a lunar crater and a volcano crater, and respectively the sea and lake that are formed therein, are both called a ‘Mare’.

Message
Dutch author Marieke de Vrij of ‘De Vrije Mare’ Foundation, puts it like this:
“A ‘Mare’ is a lake on top of a volcano that is no longer active, in which the sun and the moon shine and tides are mirrored by an ever changing celestial landscape. A Mare is also a message that buzzes around, resonating in freedom.”

What a beautiful image! Indeed, in the Dutch dictionary, the word ‘Mare’ is actually described as ‘Tiding’ and ‘Hearsay’ (Gerucht). This is a bit of older language, where Dutch people would say: ‘De Mare gaat’, literally meaning: ‘The Mare goes’, hinting to a message that buzzes around.

Horse
But strange enough, another word in the Dutch dictionary is referring to mare in the meaning of female horse, although most Dutch people are not familiar with it. And indeed, at the word ‘mare’ itself, it isn’t mentioned. This particular Dutch word is ‘Maarschalk’, meaning ‘Marshal’ in English. And here the word ‘Mare’ comes back, albeit transformed both in English and Dutch language.

At ‘Maar’schalk’ it says: ‘Mare’ = ‘Merrie’ + ‘Scalc’ = ‘Servant’ (later ‘Groomsman’). And ‘Merrie’ is the Dutch word for mare meaning female horse! Interestingly, the Dutch word ‘Merrie’ sounds like ‘Merry’ of the ‘Merry-go-round’. And this is simultanous in English language, where we see the Mare also appearing in ‘Mar’shall’.

It should be mentioned that in English language mare can also stand for a female donkey, although less often used. In Dutch language we have a different distinction. In biology though, the noble donkey belongs to the family Equidae, which includes horses and zebras.

Well Known
Another different word in the Dutch dictionary in which we see ‘Mare’ processed is ‘Vermaard’. Here the ‘maar’ in the middle of the word doesn’t refer to horse, but to the meaning of ‘Well-known’. The readers are referred back to: see ‘Mare’, where (as stated earlier) it is described as ‘Tiding’ and ‘Hearsay’. At ‘Ver’maar’d’ though, it gives examples of the Dutch expresson ‘Vermaard zijn’ as ‘Being well-known’ (or even being famous). This is usually in the context of a person being well known in the area and sometimes abroad. (in Dutch: ‘Een persoon die wijd en zijd vermaard is’).

The Buzz
To be honest, figuring out all of the different meanings of ‘Mare’ was quite a puzzle, but obviously some of those are interlinked. Now it makes sense when words such as ‘vermaard’ (being famous) and ‘marshal’ are somehow connected. In the past a Marshal had the function to arrange and direct the ceremonial aspects of a gathering, in order to officially proclaim a message. These were performed by the stable master or the dignity advisor at a royal court, who would bring messages to other royal courts or noblemen, and announce them to the common people as well. Sometimes this would be carried out with trumpets and flags by marshals on horseback who may have travelled long distances.

Just imagine: In those times there was no internet, television or radio. Nor, to our knowledge, was there any means of transport other than the slow travelling for days or weeks on foot, or on horseback (sometimes also other animals, and messages transmitted by birds). Therefore, a ‘Mare’ was hither and thither seen and experienced as a message that buzzes around for the areas it travelled through.

To the Moon and Back
Nowadays messages are conveyed so much faster, and in many different ways as well. But how do you feel about the world at large today? Quite often we see bad news on television, radio and the internet, as many systems of value on our planet seem to be out of balance and some are even endangered. So how do we deal with that?

It would be wonderful if together we can succeed to voluntary act for the benefit of planet Earth and humanity as a whole. Where one day hopefully good tidings will prevail. Thankfully, back to this day and age, the moon has seen it all, but is still here for us, and when lucky with a clear starry sky, we can enjoy its brilliant luminosity!