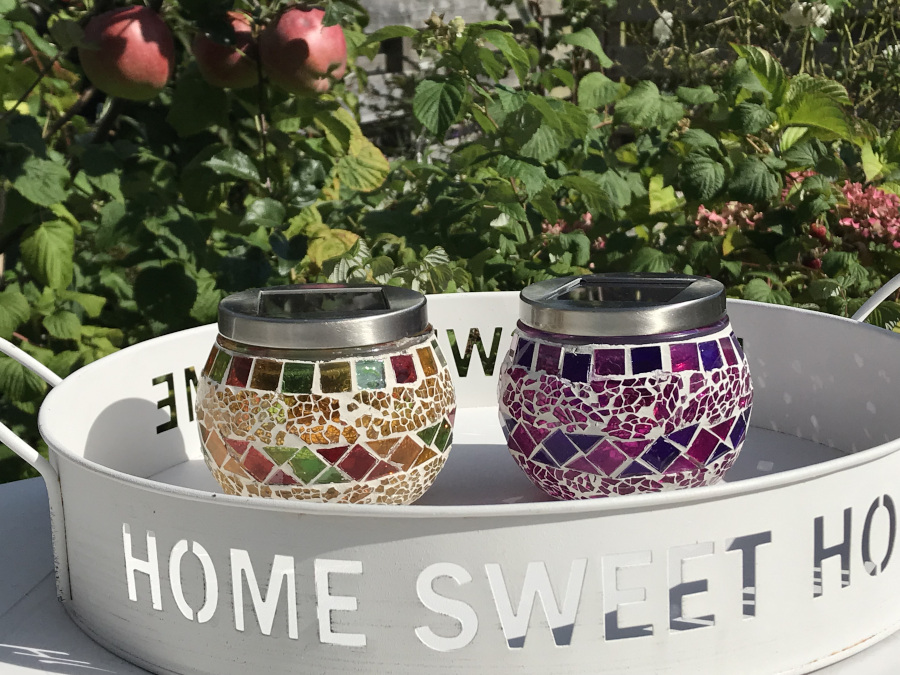 Although I don’t buy trinkets that have to be dusted often, I do love a bit of decoration in my house for creating a warm and homely atmosphere. And I found that the mosaic lights I bought a while ago are really nice!

They are small glass bowls with a light in them, each containing a metal lid with mini solar panels. So you put them outside, or in the windowsill in a sunny place to recharge, and in the evening and at night you have a kind of candle light. It’s a little brighter though, you can read a book so to speak, when you keep the pages close to it. But cosy it is!

Wonder
And suddenly in the evening, I had this sense of wonder. I was staring nicely into the lights in the dark. I thought, how is it, you just have sunlight at night. I’m looking at stored sunlight. In my living room. And I find that so special!

Oceania
And for my second aha moment, I had in fact a kind of ‘luminous’ idea (or so I think :-). It was during the day when I looked at the mosaic pattern of the glass bulb holders, and thought, oh yes, that would also be nice for the basis of the construct of an energy grid around the Earth:

Three broad horizontal orbits around the earth, one around the equator, one in the northern hemisphere and one in the southern hemisphere. Take a look at the blue mosaic bowl and see it as our globe, and imagine, you are now looking at Oceania (which covers around 70% of Earth’s surface):

Here comes the Sun
Once inspired by a pioneer broadcast of the Dutch television program ‘Tegenlicht’ (meaning ‘Back light’), which is entitled ‘Here comes the Sun’, I find such an energy grid around our planet a true outcome.

But also other initiatives I find interesting, such as intelligent engineering by organizations related to solar powered parks, and other nature plants worldwide, for example those which generate energy through tidal power, or by using the warmth derived from shallow earthlayers, and by generating energy through some wind turbines here and there.

Direct Current
Why the emphasis on solar power? Because the sun always shines somewhere, and therefore the energy can be distributed over the entire globe via a symmetrical grid of 3 horizontal orbits, and several vertical ones, via direct current (DC).

As such, it could run through an underlying hexagonal grid. So you have always matched the energy supply and demand, because DC goes almost as fast as the light and requires no storage capacity.

Energy delivery
I’m wondering if such a system could be used to power hectare villages as well. It could look like this: Two connection points for energy delivery per village plot. Such a village may consist of a maximum of 150 hectares and has the shape of a hexagon which has six corner points.

Transport public & goods
The worldwide energy grid could also be used for an international transport net, in favour of our high speed railway systems for public transport and the distribution of goods, (while discouraging international air traffic for tourism).

I myself think that this is the future, perhaps it is still a long way off, because it will also be a while before mankind has reached a certain ‘state of enlightenment’ in order to achieve something like that in an organized manner, and with all safety measures, for which we have to consciously co-create, with respect to all life forms. As for the enlightenment, you might have guessed this is a double imagery!

Resource based economy
Please let us stop exploiting our fellow human beings and nature through all kinds of revenue models. Instead, will we try to create valuable conditions for all people, which will enable us to generate a quality of life, while restoring our beautiful planet at the same time? This might be possible, because the resource-based economy is on the rise.

A resource-based economy is based on our labour as well as all natural resources and the abundant replenishment of it, caused by US. Hence, instead of exploiting Nature in all the ways you can imagine, we can also achieve the opposite, such as: respecting nature & regenerating, infiltrating, repairing, re-creating, restoring, co-creating, organizing and distributing nature. Isn’t it obvious? So it’s coming.

Electric fields
Moreover, solar panels on the roofs of houses and office buildings are not your thing, because they emit radiation to those who live and work beneath, because of the electric field that the panels generate, some experts told me. In addition, to cover a vast amount of seperate buildings may involve much more work than if we, as humanity, organize ourselves centrally.

Living Earth
Another advantage of building three of those orbits around our planet, and I think that is the main reason why I suddenly saw that in those mosaic lights, is because it is very important for the Earth itself as a living organism, that energy generation takes place in a safe and proportionate way around the globe, because well …, perhaps some kind of energetic peaks occur at all large-scale places of energy collection.

Unwanted radiation
I can imagine that vast electric fields are created in these areas, which, in combination with the reflection of sunlight, give off certain sparkles in the atmosphere, which could act as tiny focal points, but clustered together could cause some (unknown?) side effects.

Perhaps that has to do with radiation released by the generation of electricity, or because, for example, a part of the collected sunlight could not be channeled? I would like to know more about it.

Maybe we also have to consider the increased temperature on Earth, and a thinner stratosphere / ozone layer, so that the sun also has a more intensive effect, especially in the countries and continents where temperatures can rise above 40 C (104 F) for weeks or months.

Energetic level
Or, and that may sound strange: It also might have to do with some sort of energetic level, because sunlight is a living energy, it has a consciousness, so to speak. And probably it is also better for the Earth itself if those energy flows are balanced. Almost like a meridian energy. Something like that?

Our birds
And then you could see whether such power stations on a large scale could also influence the migration of birds and so on, for example because of the electro smog the solar fields generate.

Solar power
This article contains all in all a bit of unusual reasoning perhaps, and as a layman I certainly cannot substantiate that well, because I don’t have the technical know-how for that. But still, the thought intrigues me! Plus… the sun doesn’t send us a bill… 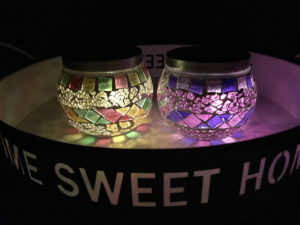 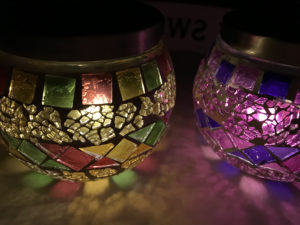